How much of a shadow does the past cast on the present ? Or have we disconnected completely ? This, I hasten to add, is not in the sense of wanting to hang on to the past in some dubious heritage ideal of ‘the good ‘ol days’. Merely to wonder: what are the meaningful ways in which a connection can be kept, without preserving everything in aspic ? The problem, as I see it, is the more we demolish and replace, the more we erase and replace collective memory, and our sense of ourselves becomes less defined. And the risk inherent in this, it seems to me, is that the model becomes more and more ahistorical and apolitical, and we continue to sink into a bland state of homogeneity, undifferentiated from other states. 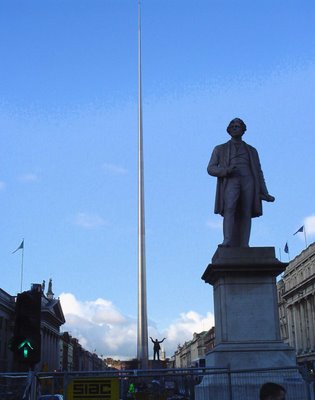 The Spire would seems to be a particularly salient example of this. What does this say about Dublin in the third millennium ? Apart from its formal elegance, what is its connection with the landscape ? Why has it been decided that an outdated model of a la carte modernism be the order of the day ? Do we not have a strong enough sense of ourselves to accept something more… relevant ? Less monolithic ? Though I don’t want to get into any particularly hide-bound notions of nationhood here. 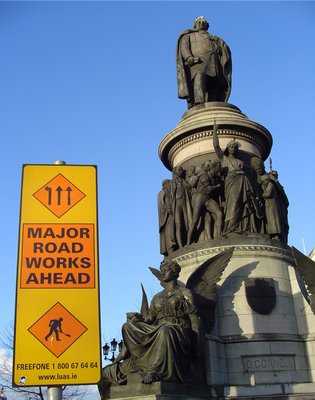 In 2003, RTE created an animation as a continuity filler, in which Nelson’s column morphed into the Spire. It was as though the shift from colonized country/second city to secular society/Europeanised multiculture was a smooth and unproblematic transition, reducible to such graphic abbreviation. You can’t help but think: hey - hang on a sec ! Let’s bring this back down to earth for a minute. Nelson gets shafted. Instead of being toppled from his perch, he’s impaled from below on a giant hypodermic and whisked up into the clouds. Excuse me while I kiss the sky. RTE’s special effects version of history. The past conveniently smoothed over. Streamlined. Inoffensive. Infuriating. 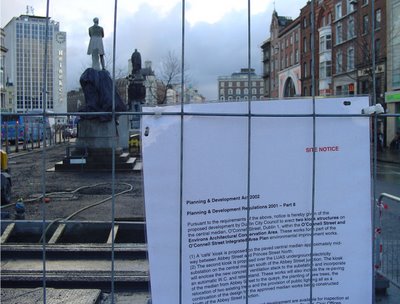 Obviously development, by its very nature, looks ahead, and the reconfiguration of the modern metropolis is an ongoing and natural occurrence. Well it should be anyway. Though Dublin’s development has been more ad hoc than organic. But is it to be at the expense of severing ourselves completely from the past ? It’s curious, all the same, how the tramlines are being reinstated. The past returns in the future tense. A future which is indeed tense given the budget overruns and delays of the Luas project. Interpretive centres miss the point. What animates and makes the landscape vital is a feeling of connection with the historical layers that lie like so much temporal silt under the present – what’s brought us to where we are now.

Some parts of Dublin still have this. Certain streets you feel a connection. What’s interesting looking at archive photos of Dublin is the fact that, historically, they’re not really that old. Yet they feel centuries removed. Very hard to make the connection. Like trying to pull together two magnets by the same poles. Like realizing that you recognize someone, but you just can’t place them. Obviously so much of this is tied up with the massive sea changes in Irish society across this time, socially, politically and culturally. If we don’t know where we’ve come from, do we know where we are going ? 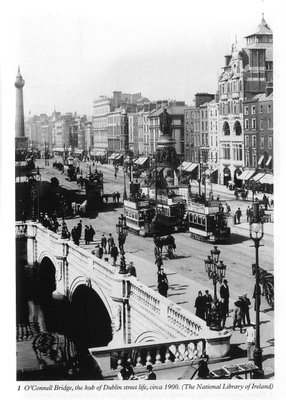 Photography, once the great arbiter of truth, has long since lost that authority in our digital age of endless image manipulation. Though even as far back as the war of independence, the radical women that were a very significant part of the motor for change were airbrushed out of photographs. In our present interrogation of the image, through the digital dialects of drag and drop, scan and save, a language so alien to those that wander the street in this photograph, we delve into the very fabric of the image, pull it apart pixel by pixel, shift bits of information around with a cartoon hand. The pixels, the building blocks of the image, its cell structure, are ironically also the very thing used to blur identity when the occasion is called for.

Dublin’s history of development over the last forty years is rife with examples of pig-headed notion of so-called ‘progress’ run roughshod over history. One of our major points of connection with the old city, the very foundations of the Medieval city, was in Wood Quay. And what did we do ? We built over it ! Not without a protracted public protest though, fought to the bitter end. Development wins out over history in a depressing show of power gone ape. A show of attitude that’s worse than Medieval. It’s Neanderthal.
Posted by Fergus Kelly at 4:50 pm No comments:

Outside The Trains Don't Run On Time 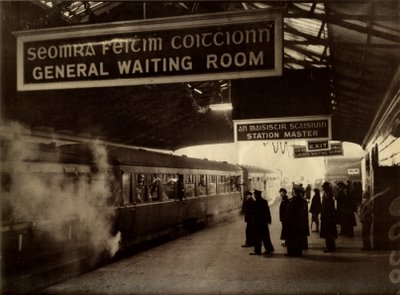 “Woe is us, said Mercier, we’re in the slow and easy.”
Samuel Beckett, Mercier and Camier, p.39

Turning the page on the calender to the last month of the year, I’m presented with an image of the last train to leave Dublin’s famous Harcourt Street line, at 4.25pm on New Year’s Eve 1958. A detail strikes me. I’m surprised how small the station staff are. I mean, they’re tiny. Not quite Lilliputian, but the average height seems to be no more than about 5’ 2”…

As a regular traveller on the Harcourt Street line in his early years, Beckett made many references to it throughout his writing. Eoin O’ Brien, in his book The Beckett Country, relates how, ‘In the Harcourt Street terminus, it was the staff who gave the place its character –

Watt bumped into a porter wheeling a milkcan. Watt fell and his hat and bags were scattered…
The devil raise a hump on you, said the porter.
He was a handsome if dirty fellow. It is so difficult for railway porters to keep sweet and clean, with the work they have to do.” Watt, p.22

And the newsagent Evans merits detailed description, not only because of his saturnine temperament, but for his ability to master a bicycle despite deformity. A talent not unusual in the Beckettian character –

He seemed a man of more than usual acerbity, and to suffer from unremitting mental, moral and perhaps even physical pain … but one thought of him as the man who, among other things, never left off his cap, a plain blue cloth cap, with a peak and knob. For he never left off his bicycle-clips either. These were a kind that caused his trouser-ends to stick out wide, on either side. He was short and limped dreadfully. When he got started he moved rapidly, in a series of aborted genuflexions.
Watt p.23-24

One passenger, Mercier, was not at ease on the ‘Slow and Easy’ –

You remain strangely calm, said Mercier. Am I right in thinking you took advantage of my condition to substitute this hearse for the express we agreed on ? Mercier and Camier, p.41

His pessimism was not unfounded. Some extraordinary events had befallen the locomotives of the Dublin and South Eastern Railway. In 1900 the up-train went too far and crashed through the end-wall of Harcourt Street station. Some twenty years later ‘somebody, from sheer wantonness, set an engine going just outside the station. Full of the joy of liberty, it puffed forth. For ages it had longed for an excuse to get away from those shining tracks – anywhere, anywhere, off these black tracks – it pointed and flung itself wildly into an astonished backyard somewhere in Albert Place’. 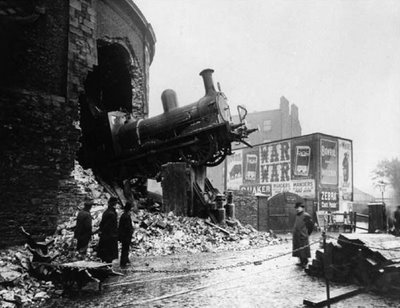 No getting out to it that way so what next no question of asking not another word to the living as long as you lived so foot it up in the end to the station bowed half double get out to it that way all closed down and boarded up Doric terminus of the Great Southern and Eastern all closed down and the colonnade crumbling away so what next That Time, p.231’

If Beckett were alive today, he could look forward to travelling this line again, as it will be re-opened to run one line of the Luas tram system. What would he make of the contemporary environment and its characters, surrounded by mobiles trilling like canaries in a tropical aviary. Disembodied, one-sided conversations, the IV drip-feed of iPod insulated passengers. The title of his prose work, Texts For Nothing could read like an ad for free text messages…

Googling “Harcourt Street line” I come across a curiosity from a discussion forum called p45.net:

Heard a mad story yesterday from someone, who heard it from a builder who's worked on sites in the area. Here's the story she was told:

'The Harcourt line was built across a fairy fort. When the station was being built, they had to bring in workers from Donegal, because none of the Dublin lads would work on the site. When the line was eventually running, the train drivers used to hoot the horn just before arriving in the station, to warn the fairies, and to avoid pissing them off. One day, a driver forgot to hoot, and the train crashed - the famous Harcourt crash. The Luas is now running on the same bit of track. The stretch of line is supposed to be haunted between Harcourt Street station and the canal.'

It seems quite fitting that the music venue, Tripod, situated at the Harcourt Street site, will, this coming Sunday, host a band who wrote a song called Outside The Trains Don’t Run On Time. Even more fitting as the construction of the Luas has certainly not run on time - not by a long shot. 'Slow and Easy' indeed !
Posted by Fergus Kelly at 1:02 am 1 comment: