"In spite of myself, I'm a meticulous man."

Two old favourites, both released in 1982, that are very related for me, almost like two sides of the same coin, as related as night and day. Both exploring imaginary terrain, each in their own uniquely particular way; Eno, in the studio, with instruments, detritus and field recording, between 1978 and 1982, creating soundscape compositions, Gilbert/Lewis/Mills, exploring a particular location and its contents over a one month period to create similar narratives. Eno, in his liner notes, speaks specifically about the idea of landscape, memory, and a sense of place. He also mentions the notion of psychoacoustic space—the idea of using recording technology to create imaginary spaces and atmospheres: the suggestive power of sound. Where Eno creates exterior, rural, and perhaps more lyrical spaces, the world of Mzui is a wonderfully forlorn, and distinctly urban interior. On Land is like a daytime hike, Mzui an after dark dérive.

Strange to imagine Eno's starting points of Fellini and Miles Davis until he explains it further:
“In using the term landscape I am thinking of places, times, climates and the moods they evoke. And of expanded moments of memory too... One of the inspirations for this record was Fellini's 'Amarcord' (“I Remember”), a presumably unfaithful reconstruction of childhood memories. Watching that film, I imagined an aural counterpart to it, and that became one of the threads woven into the fabric of this music.

“The choice of sonic elements arose less from listening to music than from listening to the world in a musical way. When I was in Ghana, for instance, I took with me a stereo microphone and a cassette recorder, ostensibly to record indigenous music and speech patterns. What I sometimes found myself doing instead was sitting out on the patio in the evenings with the microphone placed to pick up the widest possible catchment of ambient sounds from all directions, and listening to the result on my headphones. The effect of this simple technological system was to cluster all the disparate sounds into one aural frame: they became music.

Listening this way, I realised I had been moving towards a music that had this feeling: as the listener, I wanted to be situated inside a large field of loosely-knit sound, rather than placed before a tightly organised monolith (or stereolith for that matter). I wanted to open out the aural field, to put much of the sound a considerable distance from the listener (even locating some of it 'out of earshot'), and to allow the sounds to live their lives separately from one another, clustering occasionally, but not 'musically' bound together. This gave rise to an interesting technical difficulty. Because recording studio technology and practice developed in relation to performed music, the trend of that development has been toward greater proximity, tighter and more coherent meshing of sounds with one another. Shortly after I returned from Ghana, Robert Quine gave me a copy of Miles Davis' 'He Loved Him Madly'. Teo Macero's revolutionary production on that piece seemed to me to have the 'spacious' quality I was after, and like Amarcord, it too became a touchstone to which I returned frequently.”

Mzui's inauspicious beginings belie the alchemy of the process and the rare, flinty beauty of the outcome. A large factory space, in Elephant & Castle, commandeered as the artist-run Waterloo Gallery, was the physical terrain to hand that Bruce Gilbert, Graham Lewis, and Russell Mills took on, with various discarded items they encountered and put to great use. They worked 6 days a week for the month of August 1981, developing a series of sculptures and audio-visual environments for their own and the public's interaction. All recorded, with many tapes given to those members of the public who played in the space themselves. Apparently many of these willing participants went on to explore similar territory in their own work. It would be extremely interesting to try and track down these people and hear their Mzui tapes: it would lend a whole other aspect to the existing recorded document. Next to impossible probably, and, leaving aside quality control issues, the chances of any of these tapes having survived is most likely slim, but sometimes it's quite curious what Facebook can turn up in terms of connecting with parts of the past.

Like Eno, the imaginative terrain they created on the album of edited recordings had a very strong narrative focus and sense of place, in which an entire environment becomes a sounding board. They played the space. Glass was smashed and things were set on fire. The floor was ritually polished. It became a living, breathing environment. A backlog of exhibition opening bottles created the stock for the pile of broken glass, which was coralled into a roped-off area after a visit from health and safety. A former Stevie Wonder stage set of astro turf was cut up to make blackouts. Quite surreal, and quite Dada, in its own way. The Dada connection given voice by the inclusion of a loop of Duchamp saying, "In spite of myself, I'm a meticulous man", toward the end of the LP. This quote was most likely sourced from the Duchamp interview published on an Audio Arts tape in 1975 (original interview in 1959), which is now available, (along with the entire Audio Arts output, thanks to the Tate) as a podcast:

The lo-fi nature of the Mzui recordings added rather than detracted from the record – giving it the urgency of reportage. This, aligned to the resourcefulness and intelligence in the approach to creating sonic environments, and further drawing out these elements in the editing process, is what gives the record its power for me – a power which hasn't dimmed since. It connects with me like electricity. I wrote a review some years ago:

A recent search on Google maps for Gray Street appears to show no trace of the former warehouse. Long gone of course, swallowed up in 80s gentrification no doubt. I used to walk near there quite a bit on trips to London in the early 2000s (to see Wire, co-incidentally enough), on my way down to that wonderful emporium of out-there music, These Records, whose delightful proprieters were always so patient with my slow trawls through their earthly delights. I never realised the Mzui location was so near.

Praise be to Cherry Red for having the bravery to put this out, as it must've been as near to commercial suicide as any label would want to go. The only other record I can think of in a similar vein would be 23 Skidoo's 'The Cullling Is Coming', itself largely a document of live work. Though that was on a smaller sub-label if I remember rightly – Operation Twilight. One thing that intrigued me for a long time about Mzui was its title. So opaque and inscrutable. Apparently it was provided by The Brothers Quay. Though an explanation was never sought.
Posted by Fergus Kelly at 4:42 pm No comments: 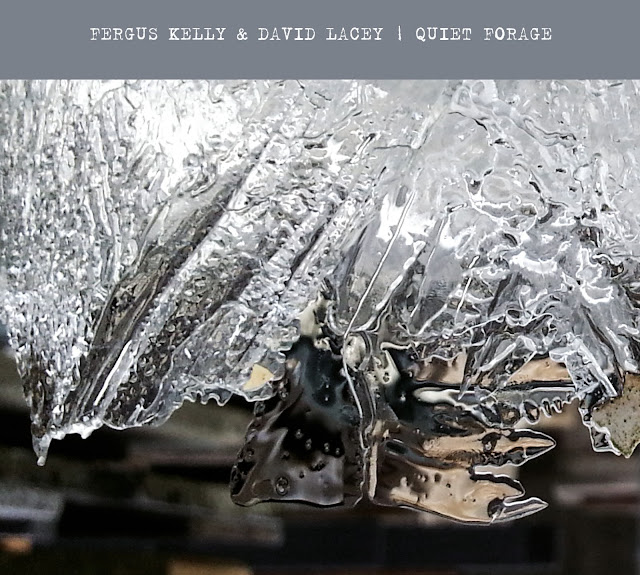 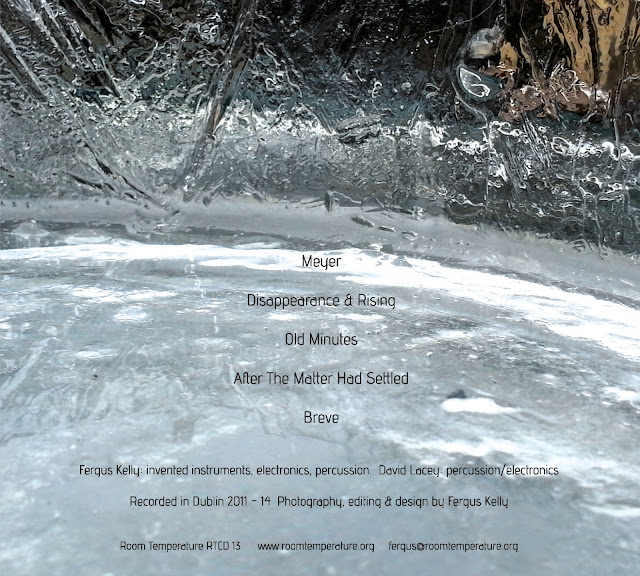 Room Temperature is very pleased to announce the release of a new duo album by Fergus Kelly & David Lacey, Quiet Forage, in a limited edition of 100. This is their second album since Bevel (2006), and is the result of various duo sessions recorded between 2011 and 2014 which have been edited into five tracks totalling 50 minutes. Fergus Kelly plays invented instruments, electronics and percussion, and David Lacey plays percussion/electronics. Orders can be made using the Paypal button on this blog, as I am currently experiencing difficulties with updating my Room Temperature site.
Posted by Fergus Kelly at 11:07 am No comments: