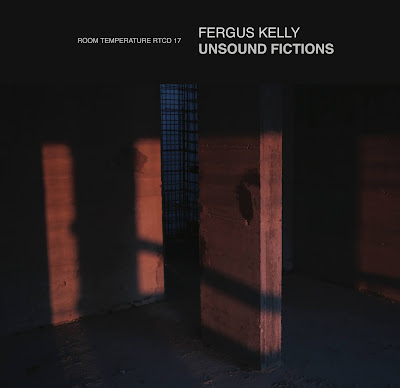 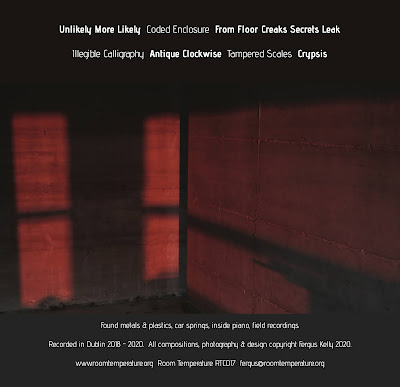 Fergus Kelly · Coded Enclosure
Unsound Fictions is a 44 minute album of 7 percussion compositions made with found metals & plastics, car springs, inside piano and field recordings. Some of the field recordings (made around Dublin city) form part of the percussive as well as atmospheric material, where metal railings, gates and poles are struck (Unlikely More Likely & Coded Enclosure), all in a close-miked manner to draw out resonances. Coded Enclosure also uses studio recordings of car suspension springs mounted on a large aluminium water heater used as a resonator.

The recordings on From Floor Creaks Secrets Leak were made in Cavtat, Croatia in 2018 inside an abandoned building site on the beach during a thunderstorm. These are combined with improvisations made with materials found on site. Photos from the site at sunset were used for the cover of the digital edition of the album. Illegible Calligraphy is drawn from a performance I did with found metals and plastics in 2019 in the Project Arts Centre, Dublin, as part of a group event called Sound Collector. The metals were attached to steel cables and swung around the space after striking, creating unique dynamics of materials in motion. The recording was edited into sections, pitch-shifted and re-arranged, and expanded into a more orchestral form and combined with field recordings that are dove-tailed at various points, further heightening the tactile and reverberant sense of the physical. 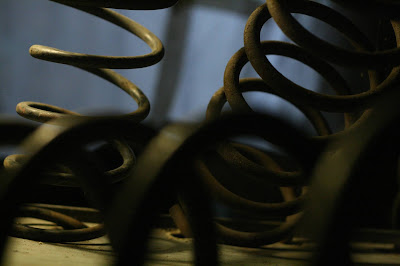 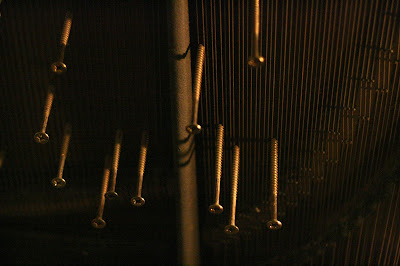 Antique Clockwise and Tampered Scales were composed with edits of inside piano improvisations made some years back that I had forgotten about. This pleasant discovery forms a nice contrast to the more clamorous, full-bodied nature of the two previous tracks, drawing the listener into a more forensically combed, intimate space. Crypsis continues in this quieter vein to close out the album, with low-end wobbles made with lengths of vibrating twine, combined with large plastic water cannisters bounced on concrete and drones made by dragging a rubber mallet across a length of box steel.
As the printers I normally use for album covers is closed during lockdown, I created an entirely hand-made artist's physical edition (25 only). I made pages of artwork with spray paint and various springs as stencils which were then cut up to fit the plastic envelopes. The same materials were used on the discs, using florescent 'punk' pink (which the camera reads as warm red) and black. There is no repetition across the edition – all are unique. 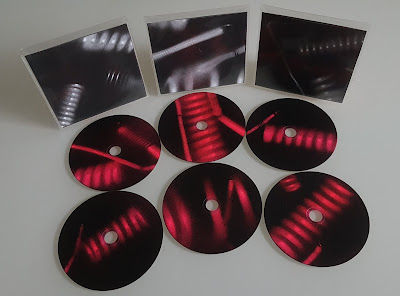 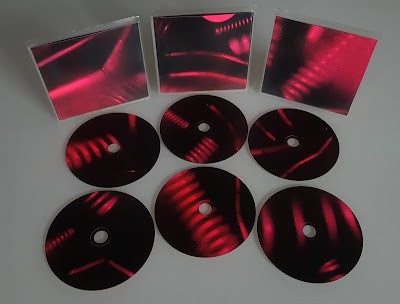 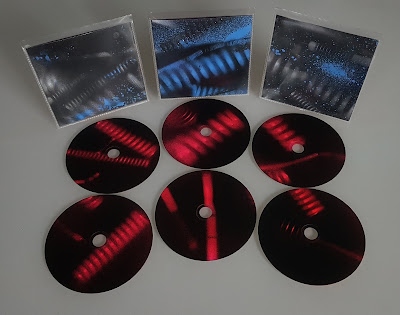 "The last time I wrote about a release from Fergus Kelly, I remarked that "Kelly has a new album almost every year in the last decade" and it was a year since the last one. Now it's been only nine weeks. I am not sure if this is one of that Covid-19 lockdown flurry of activities. Some of the recordings here are already from 2018 and 2019, so maybe it's a thing of cleaning up archives ?


Kelly is a man who uses a lot of metal-based objects as percussion, stuff that finds on the streets, but also plastic objects, car springs, the inside of a piano and field recordings. He says that the latter is from close-miked recordings of railings, gates and poles. His music is, however, not straightforward documentation of an in-situ performance, I think, but rather the result of layering various sounds together and creating a conversation between the sounds.


His previous album I found to be rather melodic, almost like a jazz record, but this one is a lot less melodic, which is, of course, no problem, as this time Kelly plays the mood card, and he does that very well. Each of the seven pieces is carefully mapped out with a few sounds interacting together and creating a wonderful subdued atmosphere, reaching a low-end hum at the end in 'Crypsis', the quietest piece here, using large plastic water canisters. A great finale.


Before that, we travelled the city with slow rhythmic twangs on fences, water drops and sometimes I thought of dear old Z'EV locked in a leaky room, such as 'From Floor Creaks Secrets Leak'; contemplative and investigative. It is all quite introspective music and beautifully put together. The perfect music for a dark day."
Frans de Waard, Vital Weekly.
"More excellent, new music from the indefatigable Fergus Kelly
(as opposed to you defatigable types): 'Unsound Fictions', on Room Temperature. Retaining just a few hints of his previous, more gamelanically oriented release (notably on the track, 'Antique Clockwise'), Kelly returns to the territory he works so well: resonant metals, dark, mysterious shards of field recordings, vaguely disturbing thuds and much more, molded into a viscous soundscape at once enticing and disturbing. Good stuff."
Brian Olewnick