Dirt Behind The Daydream 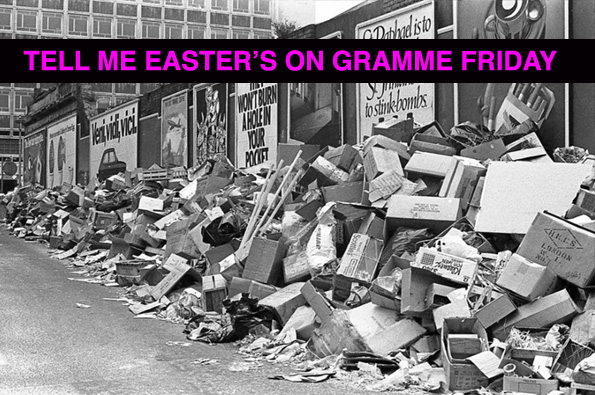 Fergus Kelly · Dirt Behind The Daydream
This stereo sound collage is a tribute to the spirit of late 70s/early 80s independent music, a period latterly referred to as post-punk. It sews together edits made from the albums of about 30 different bands. It is an entirely personal selection and not in any way representative of the time, just my experience of it, and some of my favourite moments.

It should be listened to via a decent amp and speaker set up or good headphones - not computer speakers or smartphone, as much detail and subtlety will be lost. The piece is freely downloadable to transfer to suitable listening media.
Many of the fragments are merely a second or two long, but the identity that runs through the music, like the colour through a stick of Brighton Rock, is indelibly strong and is an immediate memory trigger, re-firing those synaptic leaps, bringing you back to the original context. The time travel element is strong, but great strength of this music is that it travels so well across time - it is both of its time and beyond it; still sounding fresh and vital.
This was a time, in the wake of punk’s short-lived initial burst and eventual burn out, when bands were being more exploratory within conventional musical forms, breaking the format down and re-assembling it, often healthily cross-fertilizing genres such as funk, jazz, dub reggae, disco, krautrock, improvisation and non-Western musics. Forty years on, I continue to draw considerable satisfaction from it. Its currency remains strong.

It was music untethered to conventional musical skills, where only the most rudimentary understanding of musical structures was sufficient to make music. Now it was approached laterally, with intelligence and imagination in place of ‘chops’. That said, certain musicians from this time had considerable chops, but the spirit of the time was about stretching the form. Even if you didn’t have traditional instruments, you could find sonically rich material in scrapyards and docklands in the death throes of their associated industries. And you didn’t need a state-of-the-art recording studio.

This music was both a response to prevailing conditions as well as something facilitated by them, in the sense that, unlike now, people had more time on their hands by subsisting on the dole, living in squats and being in receipt of local authority third level grants. The conditions, though difficult on many levels, were ripe for experimentation.

I was a teenager at this time and this music made a huge and lasting impression on me. The DIY ethos was incredibly refreshing and the sense of possibility felt wide open. The music was rich and atmospheric, often like film soundtracks. Whole worlds opened up that you could lose yourself in. It created a fertile head space for making art. Some of the lyric writing drew from other parts of the culture: literature, film, art, and formed a gateway to further exploration.

Access to information was at the opposite end of the scale to the present internet age that could be likened to drinking information from a firehose. In the late 70s, information was scarce - there were music weeklies such as the NME, Melody Maker, Sounds and (in Ireland) Hot Press. Then there was the proliferation of cheap home made fanzines thanks to the photocopier - Vox being a particularly good Irish example. John Peel’s radio programme was a complete anomaly for the BBC at the time, and a vital conduit into the scene which Peel was hugely supportive of. Dave Fanning in Dublin was another supportive DJ, but, curiously (not sure why) I never listened to him !

Of course, plenty of record swapping went on between friends and blank tape was a real boon to expanding one’s library. A community of like-minded souls. Unlike the expectation of getting things online for free, when trawling secondhand record shops, you took a chance buying stuff where there had often only the slightest connection with something familiar, but it felt like a good gamble, so you made the commitment and paid for it (only small beer at a few quid, but still..)

The tribute title, taken from the Gang Of Four’s song Ether, was chosen for its critique of consumerism’s empty promises at a time when the future it proposed was slowly being dismantled and we were being sold short. Now there is the hauntological dimension of this disinterring of musical history, and the idea of ‘cancelled futures’ - a lively area of study in recent years thanks to the work of Mark Fisher and others, drawing from the original ideas of Jacques Derrida.