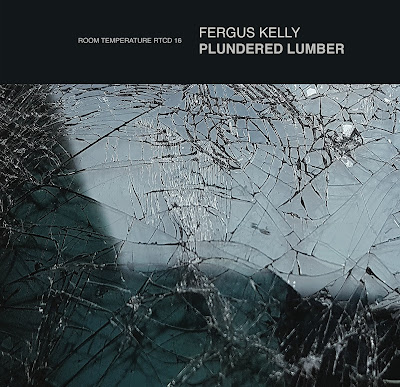 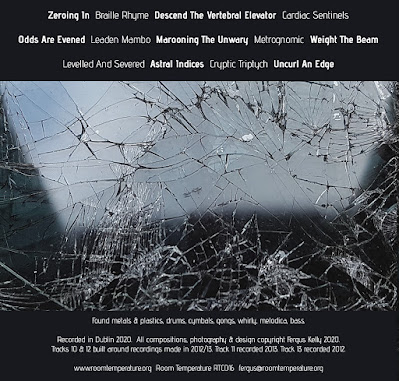 Plundered Lumber is a 52 minute album comprising 13 tracks using mostly bass guitar and metal percussion. It's a return of sorts to a form of composing last used about 20 years ago, where an emphasis on rhythmic interactions and melodic interplay was the main driver. I've used little or no processing (apart from some delay and reverb) and no field recordings. Some delays were added after, some used during recording, as a phantom rhythmic element to play against. 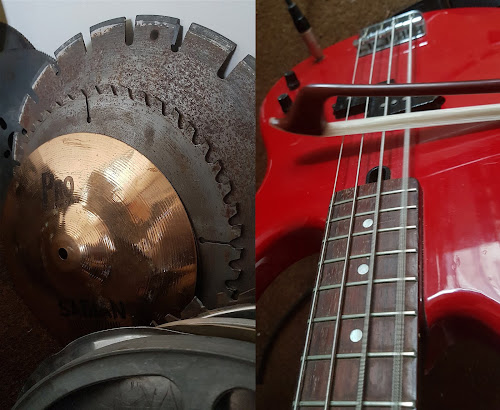 The percussion comes from my store of found metals gathered sporadically over the last 35 years (much less in recent years with more restricted access due to municipal recycling – a weird irony !). I've always loved the idea of creating things from discarded materials, building from scratch, and exploring the unique sound colours and textures of industrial materials, a lot of which are richly resonant. 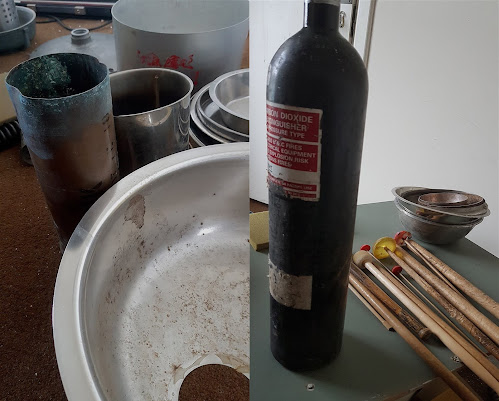 Untrained, I play bass by entirely by ear. I'm under no illusions that I possess any particular skills necessarily, but simply work from the point of view of what sounds good to me and improvise in the moment. I would never describe myself as a 'bass player', and my timing might be a bit fluid at times, but at least I can keep the bass in tune with a handy phone app. At the same time, I wouldn't go as far as Brian Eno and describe myself as a 'non-musician'. I've always loved bass though, and think it's a beautiful instrument; earthy, sensuous and sinuous, infusing the music with a pulsing blood warmth. I'm reminded of what Shellac's bassist Bob Weston said when asked at a Dublin gig in 2017 what he liked most about the bass - “It sounds awesome.” Over the years, certain bassists have really made an impression: Holger Czukay, Tony Levin, Jah Wobble, Barry Adamson, Mike Watt. 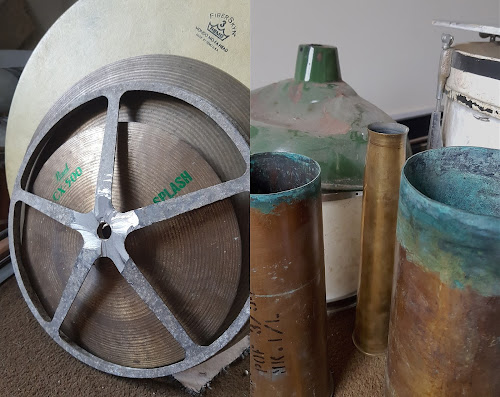 I wanted to keep things fairly simple with these compositions, structurally and melodically, leave space and maintain a sense of clarity; create clean, uncluttered arrangements. Sometimes I did build things up, but generally ended up stripping them back. I also wanted to keep them short. I had made initial forays into this in 2012/13, but only got as far as a handful of multi-tracked bass riffs that I wasn't sure what to do with, so they got shelved until I decided where they could fit. 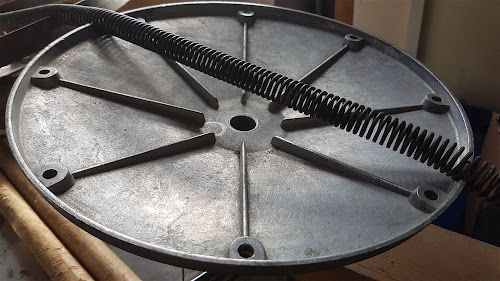 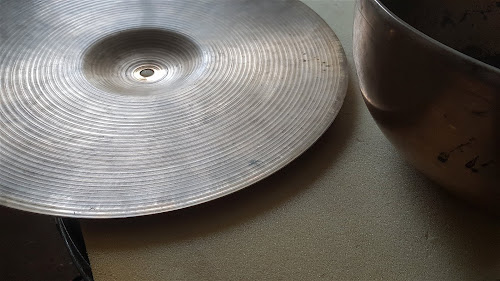 These were used as the starting point for some of the pieces, most were built anew. One of the earlier pieces, Astral Indices, which also had percussion and was more complete, is left untouched as I felt it needed no further elaboration. The other untouched piece from that time, Uncurl An Edge, is my approach to creating a very simple composition but in long form with subtle changes over its duration, a regularity which is gently altered and disrupted, much in the manner of Morton Feldman - an industrial version, using mostly sliced beer barrels and bass. The higher pitched sound that occasionally flits back and forth is a plucked egg slicer. 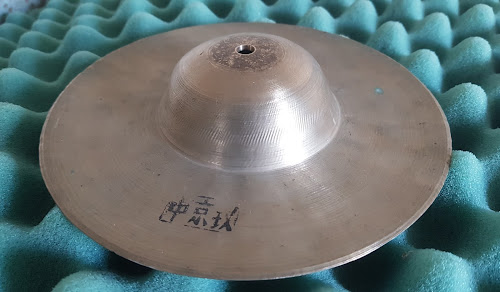 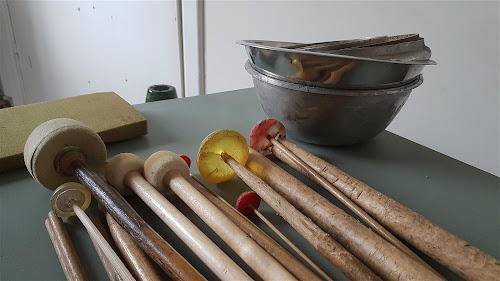 The album title existed in a notebook I keep for potential track and album titles but, though I never make obviously illustrative titles, this one was unusually suitable in that I was partly raiding my archive to create new work, making good use of things left lying around; dusted down and pressed into service and galvanised with additional material. 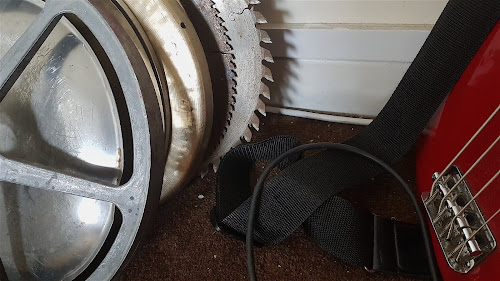 In terms of revisiting older methodologies, I decided the spray paint original artwork onto the CDs themselves rather than print onto them. I've used some of the metals employed in the compositions – which creates a nice bit of conceptual continuity – sawblades whose serrated edges make graphically strong images. No repetition occurs across the edition, all are unique. 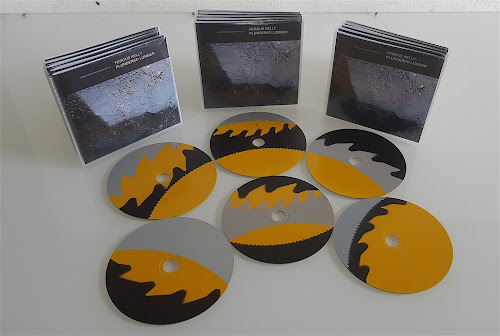 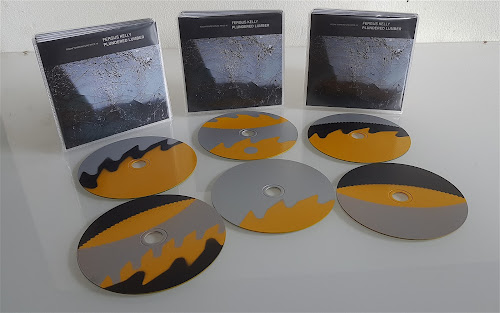 About a year ago I reviewed 'Gleaming Seams' by Fergus Kelly (see Vital Weekly 1199), an album in which he combined percussion with "treated electromagnetic recordings of ATMs, computer drives, ticket dispensers and overhead tramlines". This time he keeps it all in the realm of instruments, bass guitar and metal percussion.
As noted before (Kelly has a new album almost every year in the last decade), mood plays an important role in his music, yet you could not always call this ambient music. There is always some sort of progress to be noted and on this new release, I would say it is all a bit more musical. Kelly isn't a trained bass player, but he plays it rather well. He plays little motifs (or are they calls riffs? I don't know), repeating yet changing and on top of that he plays his metal percussion along with that and the combination of both, plus the absence this time of all sorts of electronics and processed field recordings, the concentration now lies on pieces that are moody and mellow, just also very musical. It is almost a jazz record !
Twelve of the thirteen pieces are rather short, somewhere between three and four minutes, each of which is a fully formed song. Sometimes the bass starts out and the percussion follows up, fills in and sometimes roles are reversed and the bass is the supporting instrument. No doubt there are has been layering of these recordings and the multi-tracking of the percussion makes it possible to add strange little sounds in there somewhere, such as the bowed metal of 'Odds Are Evened'.
Throughout the music is spacious and laid back; creating an atmosphere for the listener seems an important objective for Kelly. The final piece, 'Uncurl An Edge', is almost eighteen minutes and takes the material a bit further, spacing it all out even further, with perhaps less variation. It all has quite an intense feeling and shows another direction this music could also take. I am quite curious about what the next step will be; this is a great album !
Frans de Waard, Vital Weekly
"Ah, Fergus Kelly is so much fun. Having gotten used to his, erm, standard mode of operation (abstract percussion with field recordings and electronics), he springs 'Plundered Lumber' on an unsuspecting world. Emerging from what sounds to me like the Javanese jegog tradition (patient, deep and luxurious), the kind of slow Indonesian pop of Group Gapura and even a tinge of a 'Sombre Reptiles' kind of atmosphere, Kelly constructs thirteen absolutely delightful tracks where ringing metals are buttressed by pillowy, languorous bass lines, totally immersive and enveloping, deeply melodic and pulsing. It's hard to imagine listeners from any direction not finding something to enjoy. A wonderful recording."
Brian Olewnick