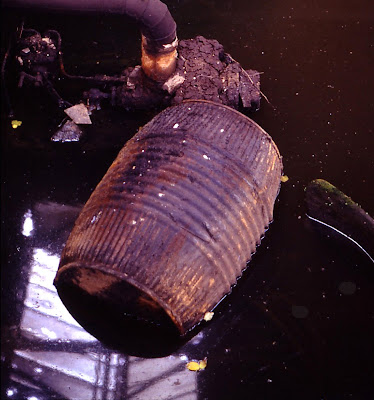 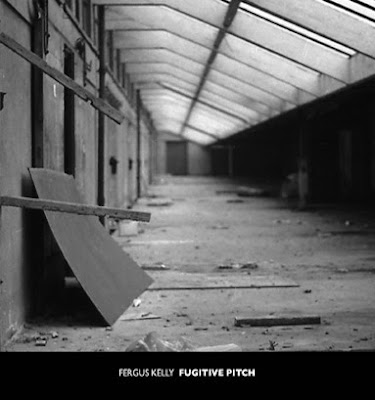 The culmination of about six months work has borne fruit in the form of two new CDRs on my Room Temperature label this month. Swarf is an 20  minute EP of four compositions created with acoustic recordings of bowed steel rods with sheet steel resonator.

I improvised with four six foot steel rods bolted to a free-standing steel sheet which acted as a resonator, using a double bass bow. The recordings were edited into a series of loops varying in length between a few seconds to about 20 - 30 seconds. These loops were then edited together in a series of cross-fades. No processing was used. No need. The variations of tone, texture and timbre through differing applications of speed and pressure resulted in a sound palette of a roughly hewn beauty. There was plenty in there.  The compositions came together quite quickly. They felt right. I let them sit for a number of weeks. They still felt right. After a few months I still felt the same way. The work was finished.

A full length album, Fugitive Pitch was  different kettle of fish entirely. Worked on over about a six month period, this was created from recordings made in cellars underneath Dublin's Henrietta Street, featuring myself and David Lacey improvising with assorted metals, plastics and drums. This material was extensively edited and processed to create the raw material that would be shaped into the finished compositions. 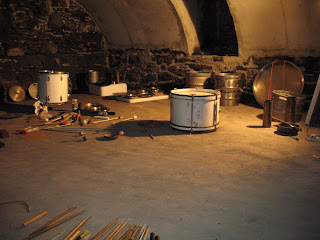 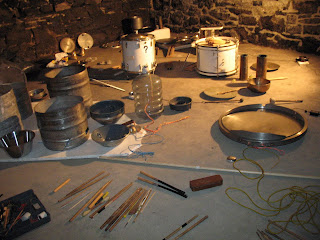 Currently I'm working a series of solo compositions using studio improvisations, electronics and field recordings as raw material, with a view to putting out a full length album in 2010. The process behind this, which is outlined below, is very similar to that behind the creation of Fugitive Pitch.

Improvisation I see as composing in the moment; an immediate interplay between gesture and surface, touch and texture. Though I have performed solo, I've not done so for many years. I usually improvise in a group context as I enjoy the interaction with the various sounds and approaches of other players, as it often draws out unexpected elements. So improvising solo, I'm playing against myself, so to speak, there's no-one else to respond to. Derek Bailey called it 'that manic dialogue with the phantom other.'

Improvisation is also a constant process of self-questioning and re-invention, as materials are deployed over a period of time and pushed to the limit of what can be drawn from them before repetition sets in. Naturally, certain gestures and approaches will become habit to a certain extent, but one always endeavours to push past this to keep things fresh. Whatever contraption I'm working with will generally have a certain lifespan before I get tired of it, then everything is dismantled and reconfigured. 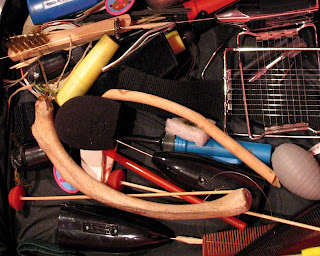 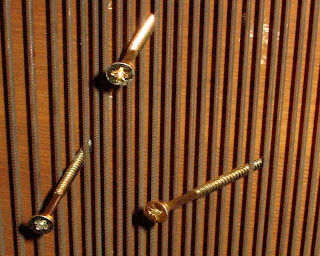 Lately, I've been trying to reduce the set-up to absolute essentials, and draw out a lot more subtlety from fewer elements. Often too many choices just results in option paralysis on stage. Limits can be more creative, enforce a bit of lateral thinking. The question is: what do I need ? And what's surplus to requirements ? A good dynamic range within the set-up is the first thing, and a manageable array of tools. Are there a number of tools that do the same thing essentially ? Chop 'em out ! One will do ! Why clog things ? Even just a clear arrangement of paraphernalia can help with a clarity of approach.

Bringing the recordings into Protools I regard as an extension, over time, of the compositional process, where material can be further edited, shaped and variously treated. There is a school of thought that would regard this process as a dismantling of the integrity of the original improvisation. But what are the various tools in the editing process other than more ways to form the material ? Software as expansion of improvisational tools. Some of the live gestures involve circular motions on surfaces to create kinds of loops, albeit with subtle variations. The only difference between live and studio electronics is the degree of control and time spent tweaking the processed material. 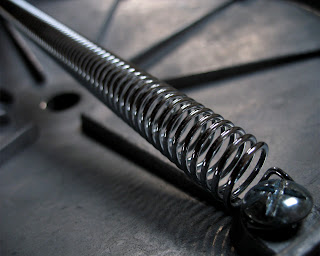 Under the sonic magnifying glass of pitch-shifting, subtle nuances and harmonics can be amplified and extended, and broaden the dynamic range within a composition. Arranging material can be conceived of in painterly terms: sound as a series of marks and textures, colours and forms, all of varying intensity and subtlety, and the laying out of this material across a surface, except instead of a surface, it's across time. The aim is to strike an interesting balance between these elements. 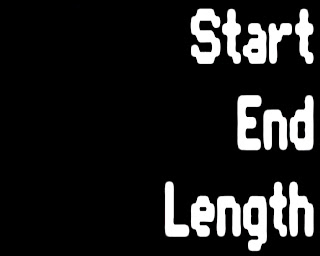 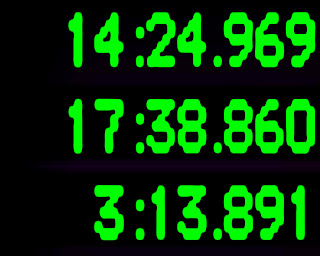 The visual nature of computer editing allows the material to be easily grouped and arranged, chopped back, shifted, and scrutinized with forensic clarity. Looping is like patterning: the repetition of forms draws out subtle details. I generally like the loops to sound as organic as possible, not machine precise, but a little frayed at the edges. The only machine precision being the edit point that allows it to flow without immediately sensing the join. Looping can also be used in such a way that it doesn’t seem like looping in the more regulated sense, but with loops of longer duration layered together staggered, so that the changes occur much more loosely and gradually - a slower overall rhythm - with phase changes owing to the different loop lengths, creating subtle variations over time, not unlike the music of Morton Feldman.

The arrangement of forms and sections have parallels with film editing, with ‘jump cuts’ to emphasise contrast and keep material fresh, ‘lap dissolves’ (cross fades), to make smooth transitions, maintain apparent continuity. Some jump cuts can have an almost sculptural presence, where a block of dense material, rising in volume, suddenly gets chopped, and the split second transition, the synaptic leap, to silence, or subtler sound can have a kind of gravitational pull, almost like teetering at the edge of a precipice and peering into the void. 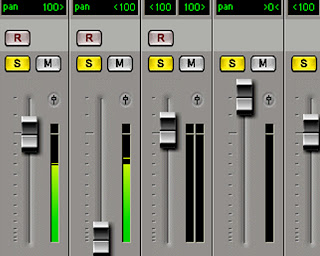 There’s also the horticultural parallel when composing, where ‘slips’ are cut from the main body of material, which are ‘seeded’, grow, and are then harvested into new forms. These forms, in turn, can be broken down, ‘decomposed’, composted (processed to within an inch of their lives), to provide a rich soil for new blooms. Interesting how the words composing and composting are right next to each other in the dictionary. John Cage noticed how his two principal interests, music and mushrooms, were also near each other in the dictionary.


Composing also involves a lot of close listening over extended periods, away from the computer, where tracks are put onto CD and listened to at home, to gain a fresh perspective. The difference between studio monitors and home stereo is an instructive one, and a truer indication of how an audience is likely to experience the work. Also, it’s very useful to be unchained from the screen, where events unfold in front of the eyes as much as the ears, as ‘watching’ the material, anticipating edit points as the cursor glides across the waveforms, is a kind of distraction to pure listening. 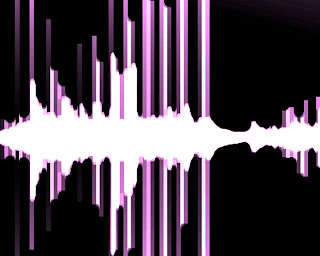 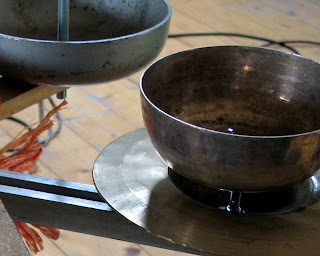 When the tracks have been listened to extensively, returned to after a period of time to gain a fresh perspective, and I feel there’s no more changes to be made, then it’s down to the business of arriving at satisfactory titles. This process will have partly begun anyway, as I become familiar with the material and it suggests certain images and sensations.

Titles are important as I feel they finish the work, seal it, give it a certain identity, and hint at ideas and associations outside of the purely sonic that broaden the scope of the work. The sounds can suggest certain words or phrases, or I can make note of certain words and phrases at another time that subsequently seem to 'fit' the work. Material can jump out of something I'm reading, which in turn can suggest variations or further ideas. Generally I like titles to be sufficiently open ended to allow for various interpretations, yet still feel somehow specific to the work. 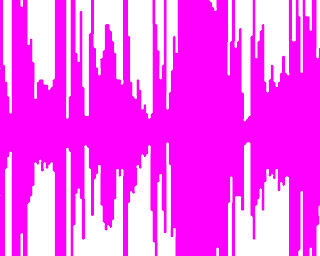 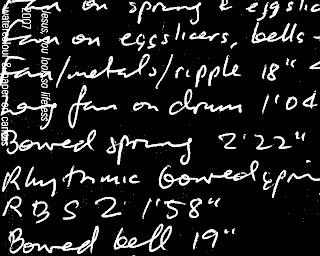 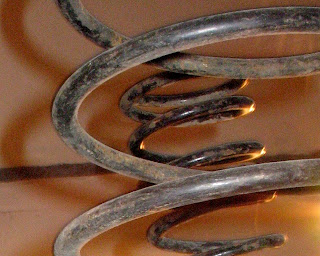