Not present in the present

This blog has become like an untended garden... time to fix some of those stray thoughts that have been sloshing around the brainpan. Tickle the synapses. Dabble in the wetware. Trap thoughts in Blogger's digital amber. 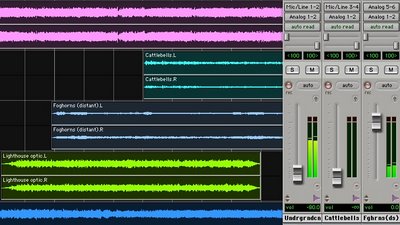 Presently wading through hours of accumulated field recordings for usable material to compose new pieces for the follow up to UNMOOR. Waveforms stretching across the screen like frayed rope. Outside of focussing this work, my mind wanders back to earlier in the day, or to later. Past or future. Rarely does it settle in the present for too long. I feel constantly pulled back to one or forward to the other. The past being such a vast archive to be endlessly trawled. Snapping out of a reverie is like being jolted back from time travel. Initial disorientation. Then things coalesce in the banality of the present moment.

Some of the recordings go back 20 years, and listening to them really takes me back: London, summer 1986 - a lonely art student adrift in an anonymous metropolis. Long walks with my recording walkman. Foraging for scraps. Microphone as dowsing rod. The roar of the Underground. The wash of the Thames. Boats and planes droning through the landscape on a bright June afternoon. Much later, exhausted and footsore, flushing urinals echo in the bowels of The Barbican. It's all there in detail, all its precise texture imprinted across the spooled magnetic tape for endless retrieval. Now transferred to the digital domain for greater longevity. The cassette a memory tablet, deteriorating over time.

September 1986: returning from an achingly slow and frankly depressing three months in a live-in bar job in London, wearing a black three-piece suit bought on the King's Road and recently scalped with my first number 1, Mother does her best to disguise the shock when this rather grim, funereal figure appears in the hall. She probably thought I looked like a Belsen escapee. And possibly I did.

Subsequent enquiries from friends into our family's welfare always included the phrase "..and Fergus got his head shaved, but apart from that, everything's fine ". Mother, so typical of her generation (b. 1925), could never stand to see my hair cut short, especially not such a brutal crop as a number 1. As far as she was concerned, I always had "such lovely hair", and, back in the day (as it seems aeons ago from my present perspective), I sure had a fine head of jet black hair.

The slideshow was always part of recounting travel experiences in our family, and, in my innocence (and enthusiasm for my subject of enquiry), I sat my parents, eager for entertainment, through a few rolls of bleak wastelands photographed on a day long tramp through industrial zones stretching from Battersea to Stratford. All unpeopled. As if the the city had been vacated. Accompanied by recordings made around these areas.

They pretended to be interested (bless 'em !), but when I think back on it now, in fairness to them, they must have found it depressing, and somewhat perplexing. What an earth could he find of merit in these miserable places ? Why are there no people ? Completely at odds with their notions of travel experience. I had no interest in shots of picturesque landmarks, people, or anything like that. Rust and ruin was (and is) my idea of beauty. Travel - real travel - was in the tradition of the flaneur: following my nose, finding out by getting lost. Staying well off the beaten track. Marathon solitary jaunts. Dehydration. Blisters. Psychogeography as city's imprint on muscle and bone.
Posted by Fergus Kelly at 10:44 pm