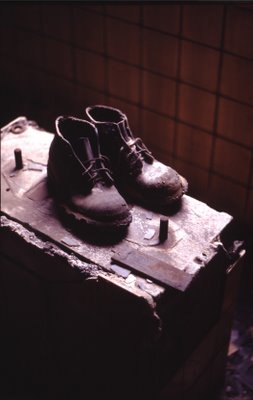 "You first saw the light in the room you most likely were conceived in. The big bow window looked west the the mountains. Mainly west. For being bow it looked also a little south. Necessarily. A little south to more mountain and a little north to more foothill and plain."

In Iain Sinclair's recent book on the poet John Clare, he finds a connection to Beckett, through a relative Peggy Sinclair, whom Beckett had an ill-fated affair with. In typical Sinclair fashion, he remarks on the street where Beckett's father had his office, and where Beckett did some writing in the early days in the garrett above - it was no.6 Clare Street. My own connection with this street could be said to be memorable, though I don't remember it at all.

September 1988: I was mugged on Clare St and knocked out. Money and walkman (with tape of Dome) stolen. Two women standing outside The Source nightclub across the road called the cops and I was taken to St James' hospital. Apparently, they had only gotten as far as taking my details when I simply exited the hospital. No idea how I got home. No money for a taxi. Did I hitch a lift ? No idea. Did I walk ? Probably. Takes about two hours. My only memory, to this day, is of walking down Nassau Street towards Clare Street, and then getting into bed sometime later.

Woke up the next morning with clothes in a pile. Not like me. Something wasn't right. Jacket pocket minus walkman - shit, I've been robbed.. but when, where.. ? Mother, after recovering from the shock of my bruised face, had the presence of mind to call the cops and a report had been filed. It was from this that the details were cobbled together. I had a bit of reconstructive dentistry. The dentist remarked on my teeth by saying, "Have you been mainlining Mars bars ?"

The whole event is completely wiped out of my memory, which, perversely, might just have been the best way to experience it. City streets normally leave impressions over time. Clare Street completely erased the impression of one very specific time ...
Posted by Fergus Kelly at 11:48 pm