An evening of fun 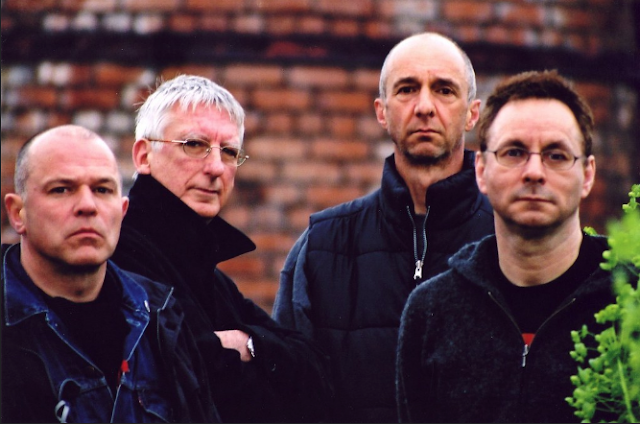 15 years to the day since this wonderful gig at Tramway in Glasgow, which gave us The Scottish Play DVD, I thought I'd mark the occasion by trawling the memory, with an edited version of a letter to a friend at the time:

Photo/backstage pass sorted, Paul Smith has asked me to take a shot of the boys in the gardens of Tramway before or after soundcheck, so I’m at the venue by 4 as per the Wire schedule of arrival in Glasgow, though it’s not clear whether 4 is the time of their arrival in the city or the venue…

Slaking my thirst after the long walk out of the city centre to the venue, there’s no sign of the lads. So I make direct inquiries at reception, and am brought round to the production manager’s office. He doesn’t know when they’re getting in. I go out to the gardens to get some ideas. Though I’m excited by the prospect of doing this photo, I’m also terrified. As time ticks by, the terror mounts. I can’t get any fucking ideas. I return to the bar and try to read my book. But I can’t concentrate. I’m on edge.

After what seems like forever, I hear some unmistakably familiar chords emanating from the stage area. The lads have landed. I wander in and meet Graham as Bruce is doing his line check. Refreshments are offered in the dressing room. I’d murder a cup of tea, but there’s a fridge full of Stella, so I opt for a beer. Try and relax me for the photo shoot (some chance !).

We’re chatting away and Colin comes in. ‘Hello !’ he beams. ‘You're looking very well… tanned as well !’ he says as we shake hands. ‘Yeah.. I’m out on the bike a lot..’, Then he disappears and I sit down with Graham again.

He had suggested in an email resuming a previous phone conversation about the collaborative album with John Duncan, so I’ve come prepared with my Dictaphone. Stories unfold and people wander back and forth. He nips out for his line check and Bruce appears. Greetings exchanged, he flops down on the couch. He seems very tired, and conversation fizzles out after a short while. Time enlarges. Eventually Graham appears. “You alright Bruce ?” he asks quizzically. “Meditating” comes the reply.

Graham resumes filling in the background to Presence. Some very interesting stories there. Then they’re all called to soundcheck. I nip out with them and get a few shots. Then we’re all back in the dressing room with Paul and they’ve to do an MTV interview and a radio interview.

The lads are back and Paul decides to do the photo. I suggest they do the radio interview first. “Nah, let’s do the photo..” he says with a sweeping hand gesture, as though to clear us all out to the gardens. We all walk out, with Paul leading the way. He seems to be going to some specific part of the gardens. The greenhouses. They been out here already? Fuck ! “Bruce wants a shot looking down in between the greenhouses… we were thinking of using it for the cover of the DVD…” Shit Smith, now you tell me ! As if I didn’t feel terrified enough !

I’ve got the lads lined up in my sights and they don’t quite fit between the greenhouses, so they have to rubberneck a bit. It looks shite. I snap away anyway, changing lenses to get different perspectives. They are smiling back down the lens at me, being model models. Before the lads go back inside, I think I should really get something else. So I say it to Bruce. “Where do you want to go ?” he says. “What about that seat over there with the tree growing out of it… ” “Yes… problem is, probably everyone else has used that…” (shite !!) “OK… em… what about over here in front of this chimney, there’s a path leading up to it that’ll give us a similar perspective to the greenhouse”. “OK”. They line up patiently. Mmm. This is a bit better. Bit more depth. I suggest Rob takes off his wooly hat as it’s sat lightly atop his head and makes him look 7 foot tall. Change lenses again for some close-ups. It’s after 7 and I really don’t want to detain them any more.

Then we notice a whole bunch of security had assembled at the entrance to the gardens and were milling about. Penguins on parade. Bruce thinks it could make an interesting shot if they mingle with them. I think it’s a brilliant idea. Someone from the venue comes out and Colin asks if it’d be OK to be photographed with the security. The woman doesn’t exactly say no, but she seems unsure, but this is enough for Colin. They scrap the idea. Shite !! It could’ve been great… even if we did a less posed one with the security more in the background… but the opportunity has been squandered. I think it could’ve been a classic. I should’ve pushed it a bit more. As we wander back inside, Colin remarks that they’ve never appeared on any album cover (apart from the back cover of Pink Flag & Chairs Missing I think to myself).

All aboard the tour bus and we’re off. The driver’s tuned to some dreadful station playing what I thought was Eddy Grant. Colin corrects me. “It’s Men at Work”. “Jesus ! You’re right… what a godawful band…” “One of the most loathsome of the 80s” Colin says. The flute on the track reminds him of the fact that Mike Thorne used to play flute. And wear glittery trousers. Well… whaddya know !

The bus pulls in to the hotel and we’re only a few yards from where I’m staying, as it happens. I repair to the hotel bar with Graham and Bruce. About 40 minutes later we’re sat in the hotel’s Thai restaurant awaiting our orders. I’m introduced to Susan Stenger. Bruce is sat opposite me, and he’s gone quite again. For a minute or two at a time he just closes his eyes. (Maybe he is just very tired. Or listening.) Graham, to my right, is, by contrast, always the lively conversationalist. When we leave, I thank Paul, and he just says “EMI”. Well I suppose it is a Mute night… and Mute are now owned by EMI…

The bus gets us back to the venue shortly after 10, and Pan Sonic are melting the concrete. The new material is stunning. Bruce had said earlier that they were going to ‘drop the bomb’. Well it was a pretty explosive set. I met Ilpo afterwards and told him how much I enjoyed the set, and the time they played Dublin, with Bruce, FM Einheit and Caspar Brotzmann. He’s grinning happily.

Back in the dressing room I say to Graham how outstanding the new Pan Sonic stuff is. He tells me he has a CDR of the new album (not out for a few weeks), sounding very pleased with himself. “Well you’re a cunt, aren’t you ?” I say. He smiles broadly. Paul says “feel free to help yourself to beer… we’ve plenty of it…” he says motioning to the extra boxes under the table, “..it doesn’t always get drunk…” So I start as I mean to go on, and bring a bottle out to the public area, which is now rammed with people. I wander about to see if I can spot any Ideal Copyists. Then I notice Mark, Paul and Chris. It’s great to see them, and we chat away until the start of the Liars set. They’ve reduced to guitar, drums and electronics, and most definitely shed the Gang Of Four influence. It’s an enjoyable, if somewhat shambolic set. I spot Graeme Rowland in the crowd, and I suggest he joins me backstage for a beer with the lads, but he disappears.

Grab another beer, and back out to the public area. I spot Irmin Schmidt, shake his hand and thank him for years of listening pleasure with Can. Time’s moving on now, and it’ll be Wire’s turn to make some noise soon. I disappear backstage. Things are running about 20 minutes late. Wire have left the dressing room now and are waiting to get on stage. I grab my camera gear and head out to take up my position with the film crew, between crash barrier and stage. It’s the most surreal sensation as I walk out from backstage, as, for a few seconds as I walk across, the whole audience looks expectantly at me…

“Nice one chaps” I say as the lads collapse exhausted onto the couches after a storming set. Paul is cracking open the champagne, and hands me a glass. The atmosphere’s really good now, everyone’s relaxing. People are snapping with their digital cameras. Bruce hands me a G&T. Cheers ! Some more champagne and beers and it’s getting on for 3. I have just been informed that the hotel has a 24 hour bar. Holy shit, this party never ends !

Back on the bus, back at the bar, downing the beers, here we go. I meet Project Dark’s Kirsten Reynolds, and chat with her for a while. She very kindly gives me a copy of their Gramophone Deluxe CD. Bruce comes over and we’re chatting for a while, but it’s here I start to find significant gaps in my memory of what was said. It’s nearing 5. Upon needing the assistance of the architecture to guide my safe passage to the toilet, I realize I’m quite pissed, and decide to make a quick exit. “Let us know what you’re up to…” Bruce calls after me as I struggle out the door. “YeahshurrBrucceseeyelater”

I wake up next morning and notice I’ve slept in my clothes. Jesus ! At least I had the good sense to take me boots off ! It’s 9.30. But my watch has stopped. Shit ! What time is it – I’ve a plane to catch !! Lash on the boots and race downstairs. Ten past ten. OK. I’ve missed the breakfast. I approach the receptionist.

“Any chance of some breakfast ?” I croak.

“Breakfast finishes at 9” she responds chirpily, with a sadistic smile.

“I got in very late last night”

Jesus. She’s not giving me an inch. Well fuck you missus. Fuck you very much.